Most Siding products really do come down to the installation and Installing James Hardie Siding is no exception, good or bad, that’s the way the manufacture will decide what to do if there is a problem! I understand why homeowners in Omaha look favorably at the lowest price, but that is most often not the best price. My first Hardie siding job, I was still wearing my tool belt which I have had for 40 years and I worked side by side with the workers who did the job. My job? It was to stay ahead of the workers with the Tyvek house wrap, taping the seams, flashing the windows, making sure it was done the way the instruction manual says its to be done. I found in my first week having never installed it before, I knew more about it than they did even though they have done a hundred houses for builders!  Guess what?, this is residential remodeling not new construction.

Well I found wet plywood under the siding that was removed around an upper window and they were going over it with tyvek! I jumped in and stopped them, pulled the house wrap off, took a skill saw and cut a 3ft x 5 ft  off wear the wet mold was and the insulation was still wet; so as they stood there and watched me cause I was in there way, I pulled the fiberglass insulation out of the cavity, put in new, covered with new plywood and pulled the house wrap over it and taped it! I got down and they came down and tried to tell me they were in charge and I should stay out of there way; Ha Ha. Later when things settled down, they came over and told me they liked the way I did that upper window. The homeowner never knew that happened!

As the week went by I had to explain the siding had to be 2″ off the roof line, frame around garage 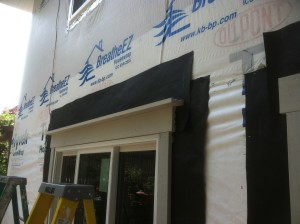 doors were to close to the cement driveway and no cut siding edges could remain uncaulked! I did all the crown mold around windows and doors as they were applying Vulkum caulk around windows and doors. I learned a few years ago from” Tommy” on” This Old House,” how to use felt around a window to channel water from out of the siding if it ever got in, when I showed them this technique they were amazed, never seen that before! If they would have given me a chance, I could have taught them much! I have visited many job sites in progress from other Hardie company’s and I see the same disregard for sound construction methods, looks great when its done but what’s under the siding is what matters!

Is cement siding the best?  For an average house, if the siding is installed properly with a little emphasis on design, vinyl siding is great. On houses where the price tag is 300,000  and up, the next buyer is going to be very discriminating; A little more money spent now and done the right way will go along way when its time to sell the house. 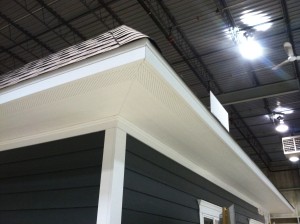 Did I mention I have 40 years experience intalling Installing James Hardie Siding in Omaha ? When I hire crews for My Company Midlands Siding, I tell them they are not going to pull anything over my eyes so do it right the first time.

The photos above show proper venting of overhangs, its helps the house breath like its never breathed before, helping the roof last longer photo shows felt over house wrap around windows, which if done properly will channel water out at the bottom of the window!

One Response so far.